“In 2008 Portsmouth FC was on top of the world; FA Cup winners and welcoming AC Milan to Fratton Park, but behind the scenes things were unravelling.

Five years on and Portsmouth found themselves on the brink of going out of business. With more owners than points at one point in the 2009-10 season, Pompey, as they are known across the football (soccer) world, were a club on the brink of oblivion.

This film shares the remarkable story of how Pompey were saved, told by the people who loved them most: the fans. With an eclectic real-life cast of true heroes and villains, the club’s dramatic fall and rise from the ashes as the UK’s biggest community owned football club is lovingly documented, with exclusive and extensive behind-the-scenes footage. Interviews with the key protagonists in this riches to rags tale, bring a previously unseen perspective to a perennial story in the modern-day sports world of high-rolling owners, whose ambition is fuelled by ever-increasing debt, until the day the cash dries up. That’s when chickens come home to roost, but they reckoned without Pompey’s fans.

Portsmouth is an island city and its people are resourceful and loyal. Never more so than in times of distress. After all, as a former manager of the club Alan Ball once said: ‘People go to war from this city’. Narrated by renowned sports broadcaster and lifelong Pompey fan Ian Darke, this film will appeal to not only to fans of the club, but also sports fans everywhere.

Directed by Barnaby Fox, this is a feel-good movie for all those who love a true David & Goliath story. Simply put, when the little guys have resilience, determination and, above all, a plan, anything is possible. This is OUR CLUB.” 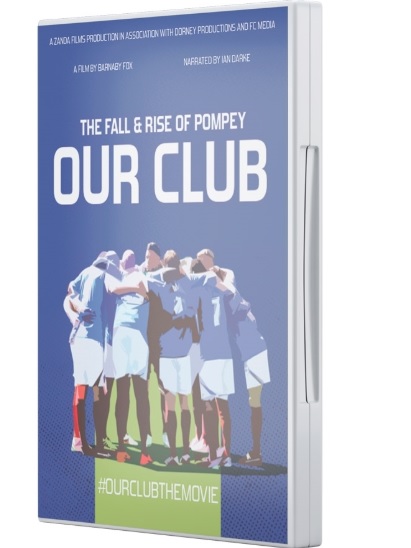